Step into spring in Porto where a labyrinth of medieval streets speckled with gilt churches rises up on the hills above the River Douro. Here’s our guide to making the most of your weekend getaway:

Porto is a city to be taken on foot – so begin with sustenance in custard tart form. For a dose of traditional fare, Confeitaria do Bolhão is a buzzy bakery-tearoom serving luxurious nata, and our favourite – the local Bolhao neighbourhood speciality, akin to a treacle tart. Cafe Guarany has some on the grander scale, boasting tablecloths and giant murals, whilst Cafe Progressois the oldest cafe in Porto, and still a local haunt. For a more artisan brew, Chá das Cinco on Praça da Alegria has unbeatable small batch coffee, as does Combi coffee. Manteigaria’s pristine pastries are baked on site for all to see – listen out for the ringing of their bell, signalling a a fresh batch on the counter.

SHOPPING FOR TILES AND SOAPS

Fueled up, amble up the Rua da Flores for little boutiques and independent shopping. Head to Prometeu Artesanato for hand-painted tiles and corkware, Oliva & Co for olive oil (with tasting opportunities!), A Pérola do Bolhão for deli items, A Vida Portuguesa for homewares, and Claus Porto for artisan soaps. Don’t miss the exquisite displays of historic packaging design on their first floor ‘museum’. 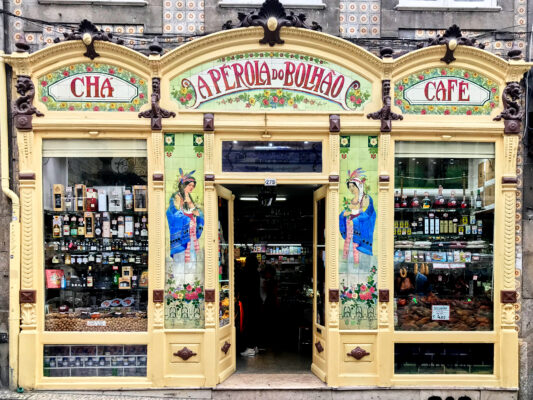 Delis in the Bolhão district

From here, venture through the historic centre to the Muralha Fernandina – Porto’s 14th century wall. You can enter the battlements at Largo 1. de Dezembro, just up from the Luís I Bridge, from where the Funicular dos Guindais also allows you to descend to the riverside, Cais do Ribiera area lined with wine bars. If tempted to get onto the water itself, Meridien4people offer magnificent boat trips along the Douro.

For lunch, Casa Guedesis is a must. Hotfoot is early for a unsurpassable juicy pork sandwich, either for guzzling at the bar with a glass of their signature pink wine, or for taking out into the square. Alternatively Óbio on Rua De Santo Ildefonso caters both rare vegan and vegetarian options (not to mention a great 7-day brunch menu). 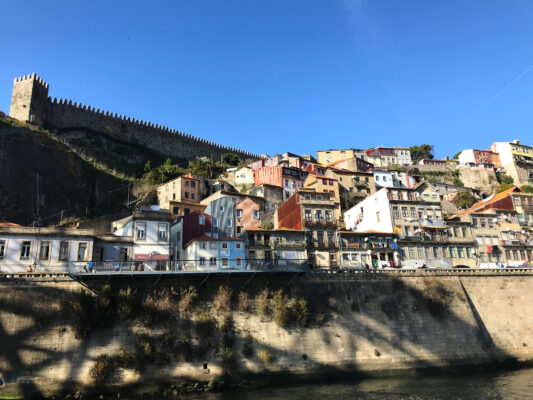 On the Douro, a city view from the water

Travel-weary, you could do worse than an afternoon’s port tasting. Skip across the Douro via the Luís I Bridge – of Eiffel tower fame, and World Unesco Heritage Site. The crowds are best avoided at the riverside porthouses – opt for Graham’s or Ferreira, the latter notably founded by Antonia Ferreira, rare female amongst men of the 19th century wine industry. Here, the tour begins in a small museum houses some of her original apparatus. Local tip: for a better chance of tasting the difference between rubys and tawnies, splash out on a few of the dearer, older wines.

Wine bars themselves abound. Try Prova – with extensive list and exceedingly knowledgeable host, or Capela Incomum, with a less unique offering but unusually sited within a former chapel. Amongst the veritable dingy collection of traditional beer houses, new kid on the block Brasão Coliseu is better than most, with craft brews to water down the classic menu of codfish and francesinha.

CULTURE AND A CATCH 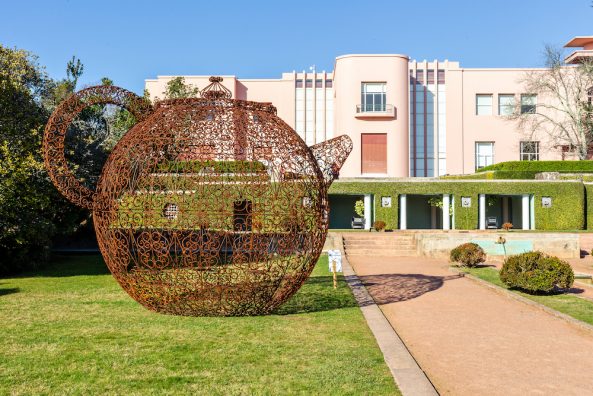 The Serralves Museum (‘the pink museum’) and its elegant Art Deco sister, the Casa de Serralves, are first port of call for culture, and a rewarding sidestep out of the city centre. Situated at opposite ends of lush landscaped gardens, the former houses a vibrant contemporary collection, with temporary exhibitions this spring including Susan Hiller, Joana Vasconceles and Tacita Dean. From here, amble further up the coast to Foz, for a sandwich and a beer with views of the lighthouse at Tavi. Or even better, another short hop to the fishing town of Matosinhos, for some of the freshest catch. As Matosinhos itself has less to offer in immediate architectural charm than other neighbourhoods, we chose to sit one back from the beach (unfortunately a rather concrete-walkway & windswept affair), at Casa Serrão.A peek into the nearby Casa da Arquitetura will see you through to the afternoon.

The São Bento railway station, adorned with around 20,000 azulejo tiles

Back in the city, Rua de Miguel Bombarda is speckled with smaller modern galleries, and on certain evenings, a buzz of exhibition openings. The Portuguese Centre for Photography, in a converted prison, is a worthwhile visit, not least for its sweeping rooftop views over the city. Temper a dose of contemporary culture with some architectural history in the nearby Clérigos neighbourhood. The Clérigos Church itself was the city’s original monument – it’s hillside location accounting for its architectural eccentricity: a single tower. At the top of the hill, the 17th century church of the Carmelitas, with picture-perfect azulejos tiled exterior, are unmissable.

The Church of Santa Clara

Complete a trio with the Church of Santa Clara, whose discrete gothic exterior sequests the elaborately decorated gilt wooden interior. For a final architectural boost of a different genre, make a beeline west of the centre for the Casa da Música, 2005 masterpiece by Dutch architect Rem Koolhaas. Concerts abound, and on Friday mornings at 10am visitors are free to attend rehearsals.

For larger groups, we stayed in this magnificent 19th Century townhouse airbnb on Rua. de Dom João IV. With 10 beds, 5 baths and soaring ceilings, we’ll need no excuse to return.

CULTURE, OUTSIDE LONDON, WHAT'S NEW
By using this website, you agree to our use of cookies. We use cookies to provide you with a great experience and to help our website run effectively. Find out more.